The Board is the governing body. It is responsible for setting strategy, managing risk, monitoring performance and compliance.

We are blessed to have people serving on the Board who are committed to the retirement schemes and services the Board offers to the Anglican community and the broader Christian community in New Zealand.

The Board consists of eight members. They are a mix of specialist appointments and representatives from Church bodies.

The current members of the Board are:

The Very Reverend Lawrence Kimberley (Chair) – BCom, ACA, BTheol
Lawrence is the Dean of Christchurch Cathedral and a member of the Christchurch Diocesan Pension Committee. Lawrence was appointed by representatives of the Dioceses in New Zealand and has been on the Board since 2000.

The Reverend Vicki Sykes (Deputy Chair) – BA, Dip.Tchg, LTh, Grad.Dipl. NFP Management, MSocP (Hons)
Vicki is self-employed and works as a consultant, supervisor, coach and director on several boards. She was Chief Executive of Friendship House, an ecumenical community and social services agency in Manukau, from 1998 to 2015. She has also worked in education and Anglican parish ministry. Vicki was elected to the Board by the ordained ministers of the General Synod/Te Hīnota Whānui in 2016.

Kerry Burridge – BCA, Dip. Banking, MPhil (Hons)
Kerry is an experienced director, senior executive and international consultant who specialises in economic development, banking and finance. She is an independent specialist director on the board of the Bank of the Cook Islands (BCI), a role she has had since October 2013. She has worked extensively with international aid donors throughout the Pacific Island nations. Kerry was appointed to the Board by the Standing Committee of General Synod/Te Hīnota Whānui in 2018.

Brendan O’Donovan (Licensed Independent Trustee) – MCom (Hons)
Brendan is a professional director with over 25 years’ experience in the financial services industry, notably as Chief Economist for the National Bank and Westpac NZ. He is the Chairman of the Co-operative Bank. He is a trustee for a number of superannuation funds, all operating in the mutual or charitable sectors. Brendan was appointed to the Board by the Standing Committee of General Synod/Te Hīnota Whānui as the Board’s Licensed Independent Trustee on 1 April 2017.

The Venerable Don Rangi QSM
Don retired from public service in 2013 and is engaged as an Ecumenical Chaplain to Maori at Wellington Hospital (CCDHB). He is the Vicar General of Te Hui Amorangi ki te Upoko o te Ika. Don was appointed to the Board by representatives of Te Pīhopatanga o Aotearoa in 2016.

Hugh Stevens – BSc, BE (Hons), MBA
Hugh has worked in the financial services industry for over 15 years, both in New Zealand and overseas. He is CEO of Smartshares Limited. His investment industry knowledge benefits the Board. Hugh was appointed by the Standing Committee of the General Synod/Te Hīnota Whānui and joined the Board in 2015.

David Wallace – MBA, BMus
David leads the wealth management business at a major bank. David was appointed to the Board by the Standing Committee of the General Synod/Te Hīnota Whānui and has been on the Board since 2012.

The Investment Committee is made up of experienced industry professionals who share empathy for the aims of the Church. They work closely with management and oversee compliance with stated policies and limits.

The current members of the Investment Committee are:

Brendan O’Donovan (Chair and Licensed Independent Trustee) – MCom (Hons)
Brendan has a background in financial markets, banking, monetary policy, financial stability and industry analysis. He has also part-owned, developed and been a director of a number of private companies, particularly in the retirement and child-care sectors. Brendan is a professional director and is Chairman of The Co-operative Bank. He was appointed chair of the Investment Committee on 4 September 2019.

Don Baskerville – BSc, AIA
Don is a business consultant with more than 30 years’ experience in the superannuation industry. He is an associate actuary and a member of the Institute of Directors. Don was a member of the Board from 1989 to 2012 and its Chair from 2003 to 2012.

Andrew Johnson – BSc (Math), CFA
Andrew has over 35 years’ experience in the investment and superannuation industries. Currently he is a professional director and independent investment consultant specialising in strategic portfolio management. Prior to this Andrew was employed as Head of Asset Consulting for a global asset manager.

Kevyn Rendell – BA Hons, DipBS
Kevyn is a principal of Gould Steele & Co and has been a stockbroker for more than 35 years. He is a member of The Institute of Financial Professionals and an Authorised Financial Advisor.

Hugh Stevens – BSc, BE (Hons), MBA
Hugh has worked in the financial services industry for over 15 years, both in New Zealand and overseas. He is CEO of Smartshares Limited. Along with Brendan O’Donovan, he is the Board representative on the Committee.

The Board employs staff in Wellington, led by the Chief Executive, covering Member Services, Finance, Investments, IT Systems, Compliance and Communications.

The wonderful people of the Member Services team are the contact point for our members and provide a high quality professional and friendly service .

The team brings deep experience in all aspects of our operations and comprises Janet, Jo, Mary and Mike. The team is led by manager Bruce Dutton, who has served the organisation for over 25 years. 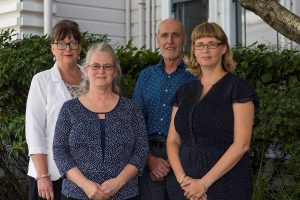 Mark Wilcox (Chief Executive) – BCA, CA, MInstD
Mark is a chartered accountant with more than 25 years’ experience in the banking, insurance and finance industries. Prior to joining the organisation in 2013 as General Manager, he was Chief Financial Officer for The Co-operative Bank (formerly PSIS) between 2008 and 2012. Mark is a Member of the Institute of Directors and his core strengths include strategic leadership, governance and risk management. Mark is an active member of Wellington Central Baptist Church but is also involved in his local Anglican parish where he plays pipe organ on a regular basis.